Come and explore the 900-year history of this beautiful building – which may have once been the site of a Saxon chapel. 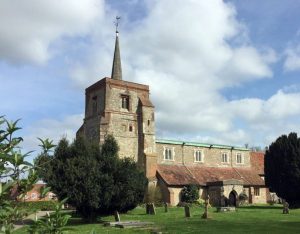 St Leonard’s Church is set in a traditional churchyard at the centre of the lovely Hertfordshire village of Flamstead. It is the focal point of the village conservation area, with a history stretching back over 900 years to Norman times. Even before then, it is possible that a Saxon chapel occupied the same site. This is living heritage: valued, cared for and passed down the generations of people who have looked after the building. Now it is our turn to ensure that the heritage enshrined in St Leonard’s is protected and sustained for future generations to enjoy.

When first constructed from 1120 onwards, the church wasn’t this big: the tower was shorter, the building narrower without the side extensions, and the East end did not have a chancel. The main Nave did not have the “double decker” row of upper windows forming the clerestory. 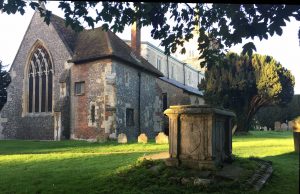 The first major remodelling involved replacing the side walls with rows of arches, known as arcades, as early as the 13th century. 100 years later the East end was extended to form a longer chancel, and the building beside it known as the sacristy was constructed – looking a like a rather quaint priest’s house. Yet its narrow vertical windows resemble arrow-slits.

Later builders extended upwards. In the 15th century the upper clerestory was added, and the tower raised to accommodate bells. Massive angled buttresses were constructed to support the extra weight. In 1664 five of the six bells were made by Anthony Chandler, from a well-known family of bell-founders, possibly being cast on site. The sixth, added in 1729, completed “the sweetest peal in Hertfordshire”. 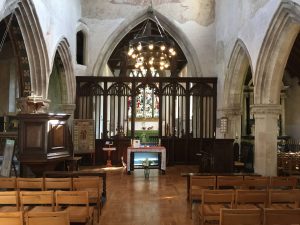 At the same time as the clerestory was built, a spiral staircase (the “rood stair”) was constructed inside the wall next to the north altar, most likely leading to a minstrels’ gallery which is no longer present. This tiny stairway now ends in a doorway in mid air. Another intriguing piece of heritage is the tomb effigy only recently attributed to Thomas Frisby, who died in 1410, and his wife. We can tell by his clothes and the style of his beard that Frisby was a “serjeant-at-law” – a legal pleader who represented people in the central courts. The story of how his identity was tracked down reads like a historical detective novel.

The wooden rood screen, separating the nave from the chancel, was carved in the 1th century and has some intriguing miniatures hidden away on the panels. There are jester’s heads, and what look like pineapples. Atop it are carved figures from Oberammergau dating from 1912. 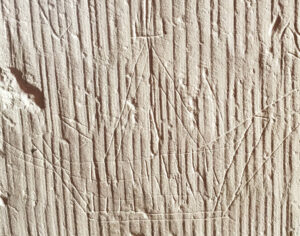 Arches and pillars in the church bear a rich collection of engraved signs, symbols and inscriptions, ranging from simple scratched initials and enigmatic signs to more carefully presented memorials, some of them dating back to the thirteenth or fourteenth centuries. These are known as “medieval graffiti” and will be the subject of a detailed study as part of discovering more about our heritage.

The image shown here is of a medieval ship known as a Cogge, and is hidden away on a pillar near the font of the church. Nobody knows how or why this charming motif came to be scratched on a church pillar in Hertfordshire, along with an image of another boat. And having recently re-installed the bell-ringing mezzanine floor in the Tower, even more graffiti has come to light, dating from when the bell ringers whiled away the time in the 19th century. 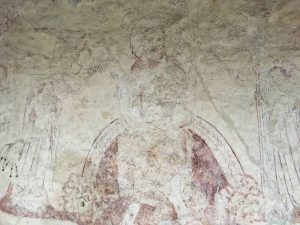 Most fascinating of all are the medieval wall paintings which were covered up with whitewash plaster during the Reformation. They lay forgotten for hundreds of years until being uncovered again in the 1930s. We have an important series dating from the 13th-19th centuries, praised by Pevsner (the renowned architectural historian) as being second only in the county to those at St Albans Abbey. Once the building is made properly weatherproof, there will be an opportunity to have these professionally cleaned and where necessary restored. We plan to create a 21st century fabric wall hanging to show how the “Christ in Majesty” painting may have looked in full colour.

Apart from its heritage, St Leonard’s is living building for the community. It is in regular use for services, weddings and funerals can be conducted. Community events such as flower and art festivals, book festivals, singing, bell-ringing, historical talks and parish meetings also take place in the church. 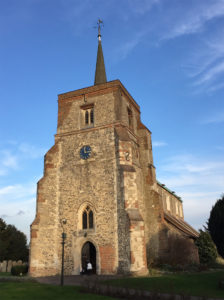 The building is true to its locality, walled with flint facing and Totternhoe stone dressings from the nearby quarry in Bedfordshire – see the Beds Archives link. And being set on a hill, its “Hertfordshire spike” spire is a landmark for miles around. In the churchyard, the 1811 tomb chest of Thomas Pickford, founder of the celebrated firm of carriers, is a grade II listed monument in its own right.

St Leonard’s Flamstead houses heritage treasures of significant national significance, within an attractive building which has retained its beauty and architectural integrity down the ages.

It is our responsibility to ensure it is cared for and preserved for future generations to use, to enjoy and to marvel at.