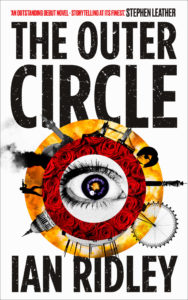 Flamstead author Ian Ridley has swapped the buzz of sports books for the excitement of writing a thriller – and is selling copies in the village shop to help raise money for the St Leonard’s roof appeal.

The book takes as its starting point the day after the closing ceremony of the Olympic Games in London 2012 and imagines a lone figure walking into Regent’s Park Mosque in London to commit an atrocity.

From then on it follows five very different characters caught up in the drama, including a national newspaper journalist and a young Muslim, before a dramatic ending five days later.

Ian, best known as a football writer for newspapers including The Guardian and Mail on Sunday,  said: “I’d always wanted to write a novel and finally I got round to it. I hope it combines good writing with a good plot and some memorable characters. I certainly got caught up in following them and seeing where the story took them and I hope others will too. And hopefully I can raise a bit of money locally for the roof appeal too as every penny counts.”

A donation of £1 from each copy sold in the village store will be donated to the Flamstead Heritage Project for the church roof.