Hard Hat Tours – a real hit with those who took part

80 people from the local community took take part in one the hard hat tours held on 18th and 20th May 2021, and all reported how much they enjoyed it. Each tour lasted around an hour, giving people a unique opportunity to see up close the work on the windows, walls and roof timbers of St Leonard’s. For those not able to join a tour, an exhibition in the churchyard showed the resin maquette constructed by contractors Universal Stone prior to carving the new angel corbel, and fragments of the clunch stone from the original windows. Some of the rotten timbers recovered from the roof, and the glass-reinforced plastic covers removed from the windows, were also set out for people to see. In the tower, visitors saw a model of the roof structure made by a volunteer, the detailed tracings used by the stonemasons, and a collection of medieval nails from the roof timbers. Below are some photos of the event. 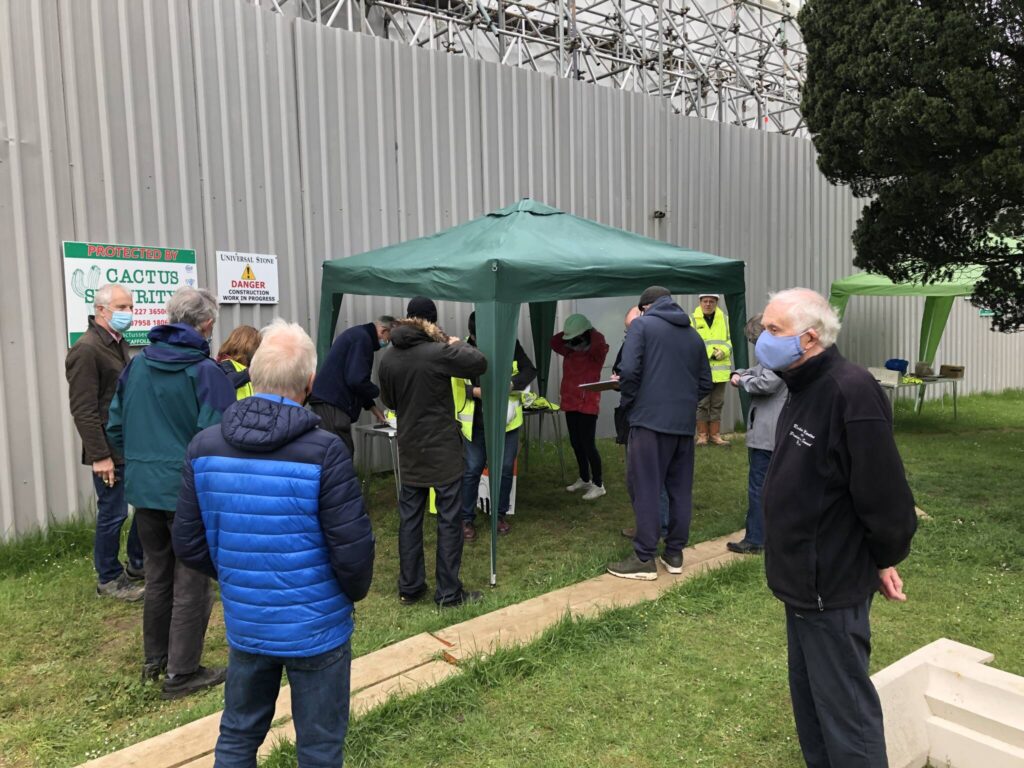 Visitors signing in for a Hard Hat Tour ahead of a health and safety briefing. The tour started with a brief talk about the timbers recovered from the roof and the fibreglass covers removed from the windows, and an explanation of how the building had changed and evolved since first built in the 12th century. 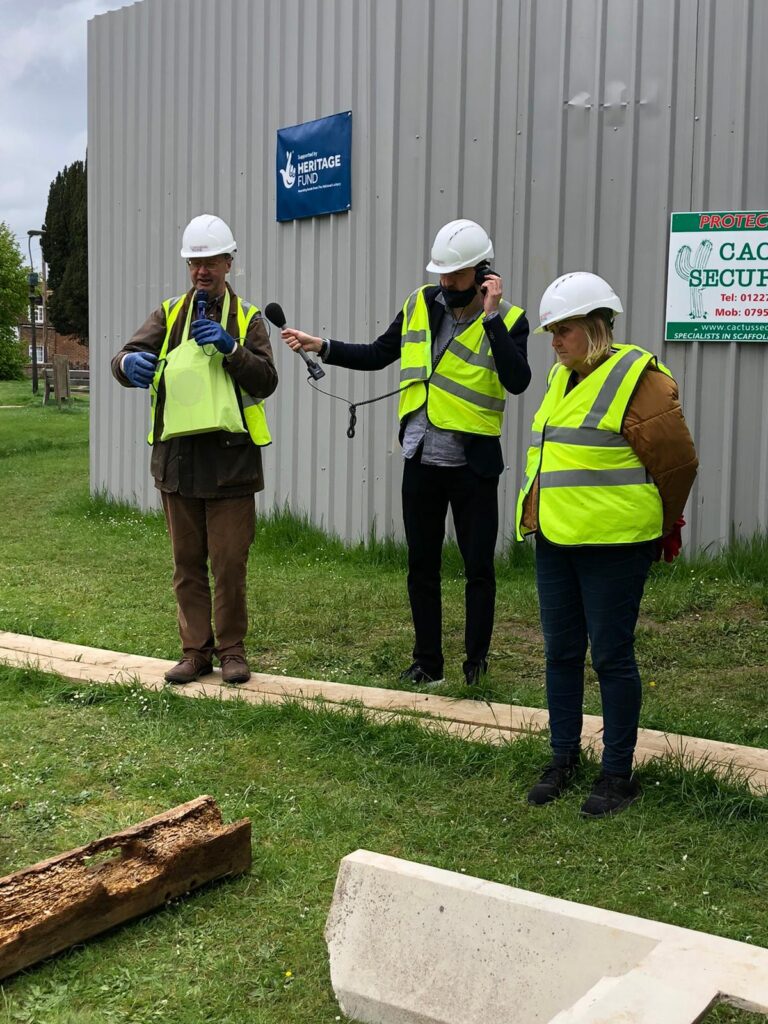 3 Counties Radio sent a reporter along to experience a hard-hat tour and tell the story live on radio – here he captures the introduction being given by Andrew Lambourne, the Heritage Project Director. 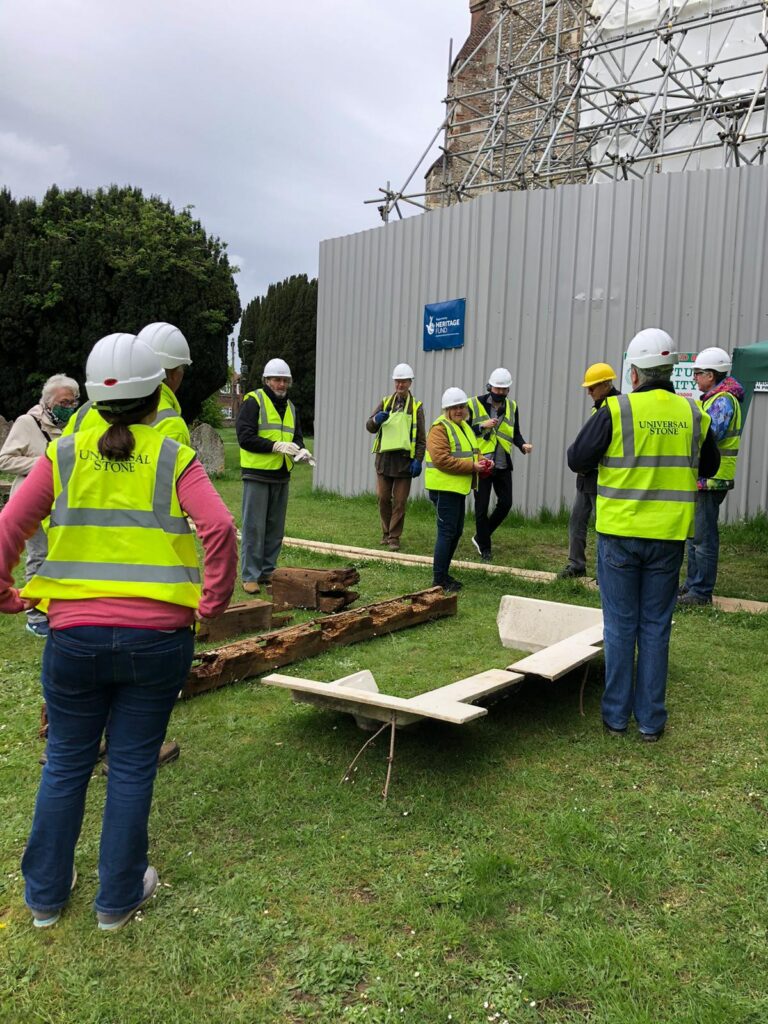 The tour started with exhibits of the rotten timber and the glass reinforced plastic covers from the windows – it’s interesting to see that the ridge timber succumbed at the mortise-and-tenon joints. 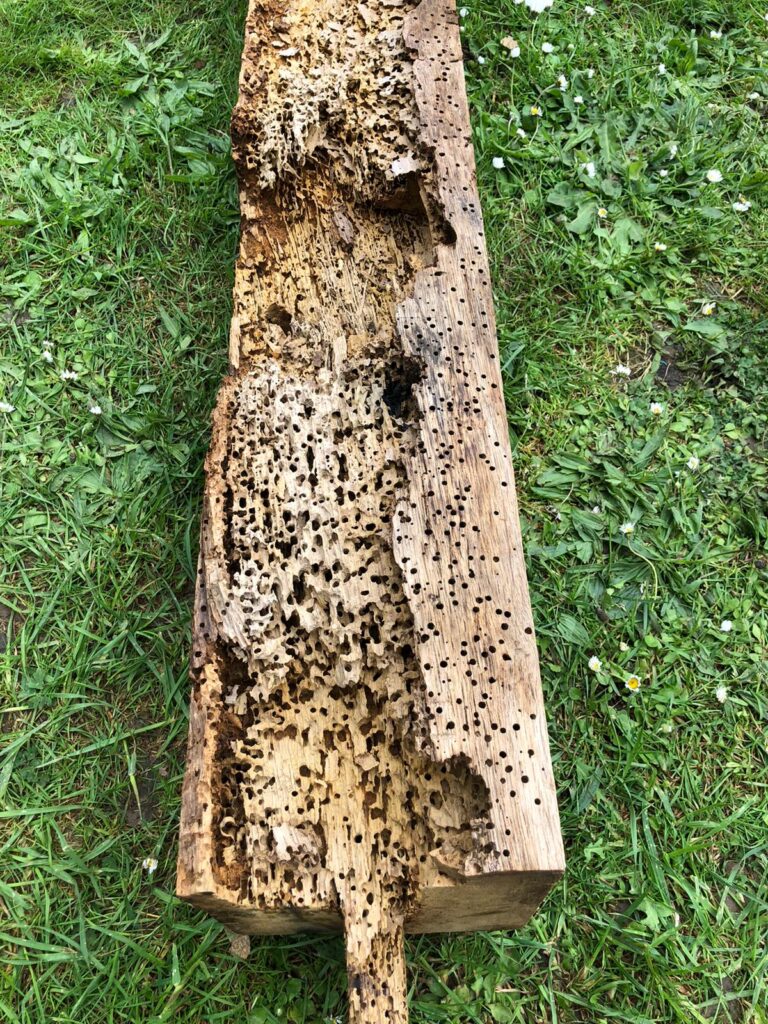 Close-up of a 15th century oak ridge beam eaten away by deathwatch beetle and rot – this timber is thought to have been around 300 years old when the roof was built, making it some 900 years old now. 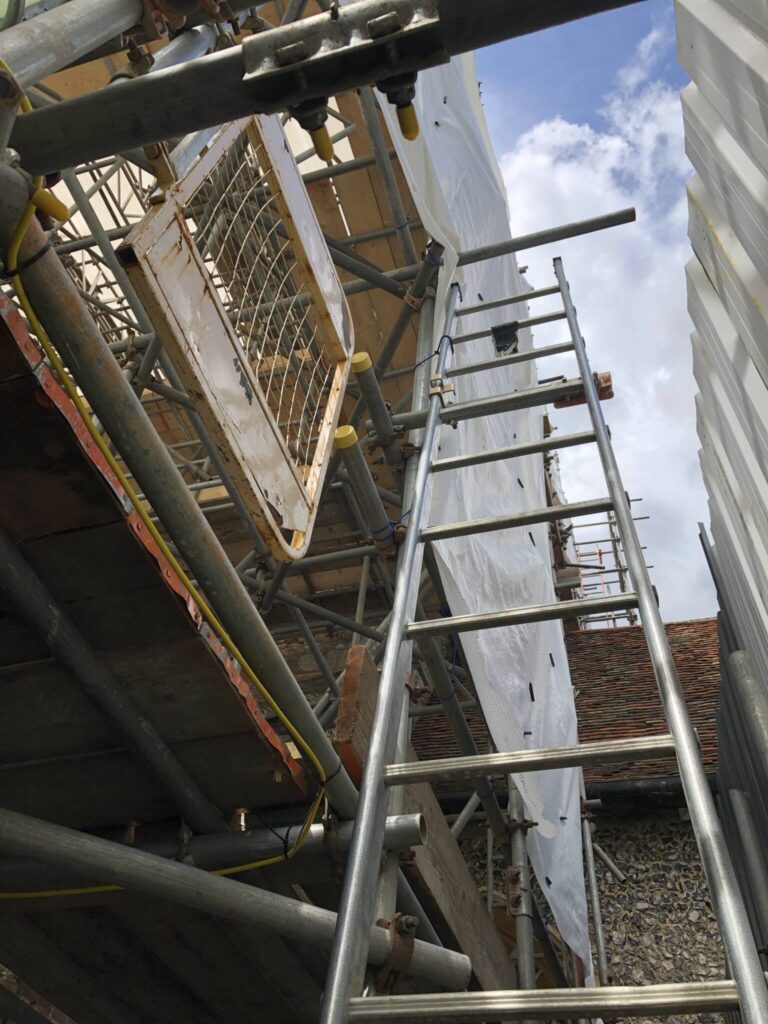 The stairway to heaven – one of the ladders leading to the viewing platforms on the scaffold. The outside scaffold itself is a massive structure weighed down by 168 tons of water in huge plastic containers, so that it withstands the force of the wind. 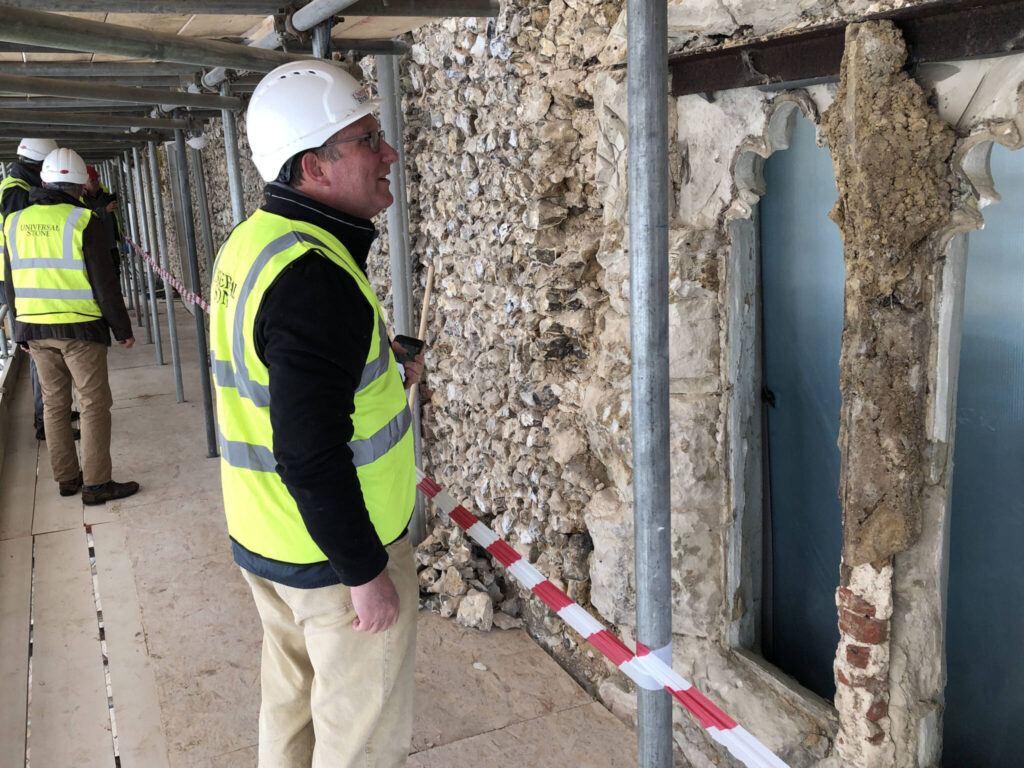 An unrestored window showing the original clunch stone and crude repairs beneath the 1968 fiberglass covers. The leaded lights have been removed and are being restored and modified to allow for panes which can open so as to ensure adequate ventilation in the building. 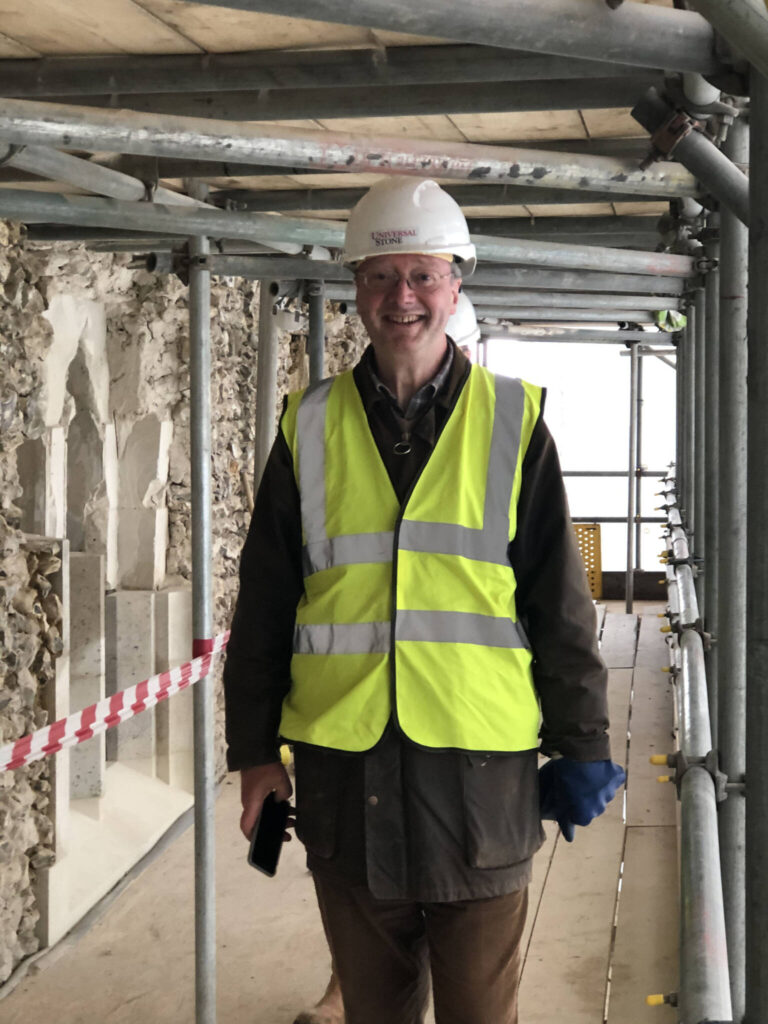 A happy Heritage Project Director next to one of the partly restored clerestory windows: “This makes it all worthwhile!” 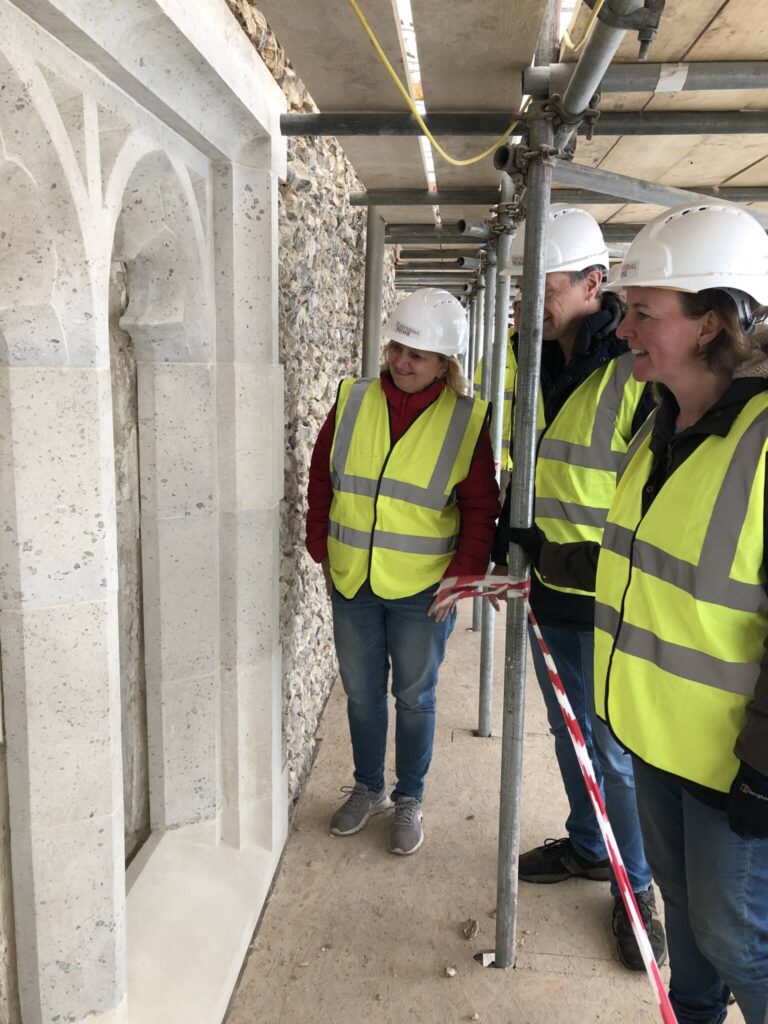 Visitors admiring a newly restored window. Clunch from Totternhoe quarry matches the original stone used for the window. Harder Chilmark stone from the Chicksgrove quarry in Wiltshire has been used for the cills to withstand the weather. 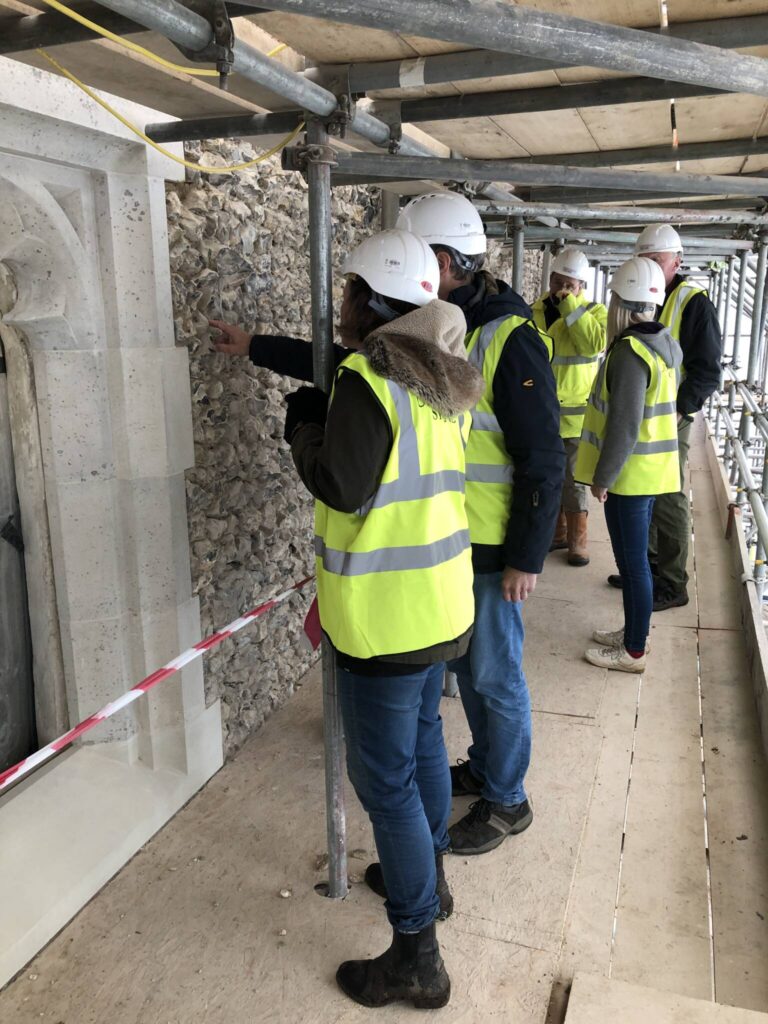 The cement rendering used to repair the walls in the 1960s has been carefully removed, and any loose flints bedded in with lime mortar, the original building material which allows the walls to breathe. Lime mortar rendering will then be applied. 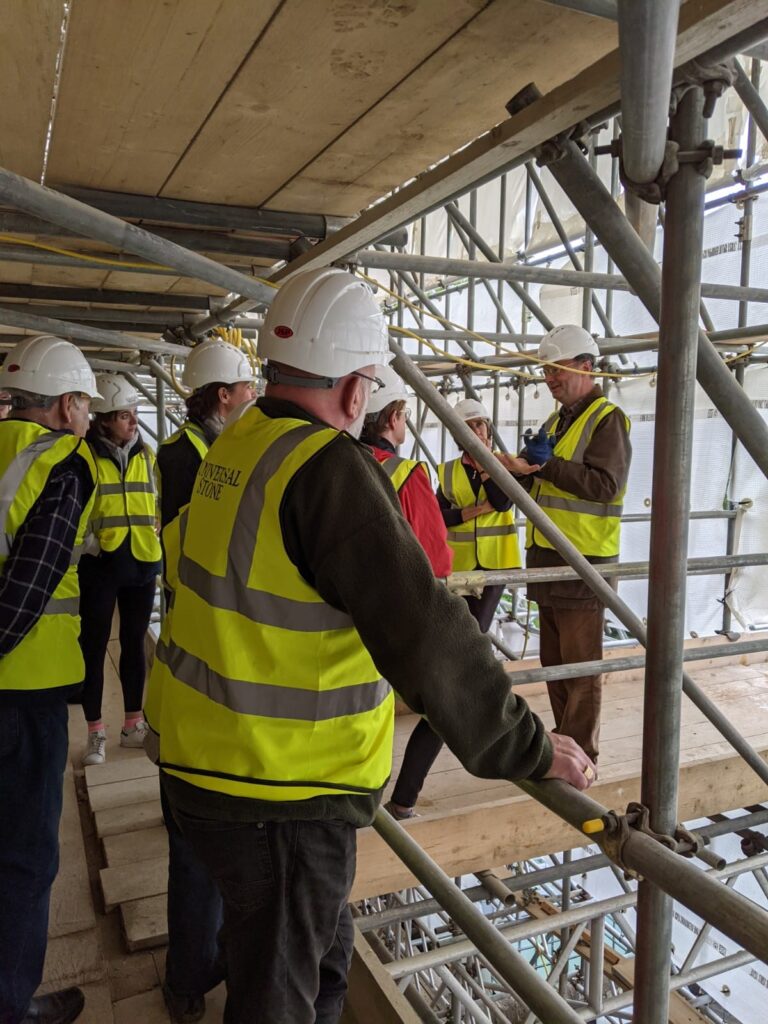 Tours like this are an excellent way to spark interest in the way the building was constructed, the generations of skills embodied in its design, and how some of the more recent attempts to preserve it had made matters worse. 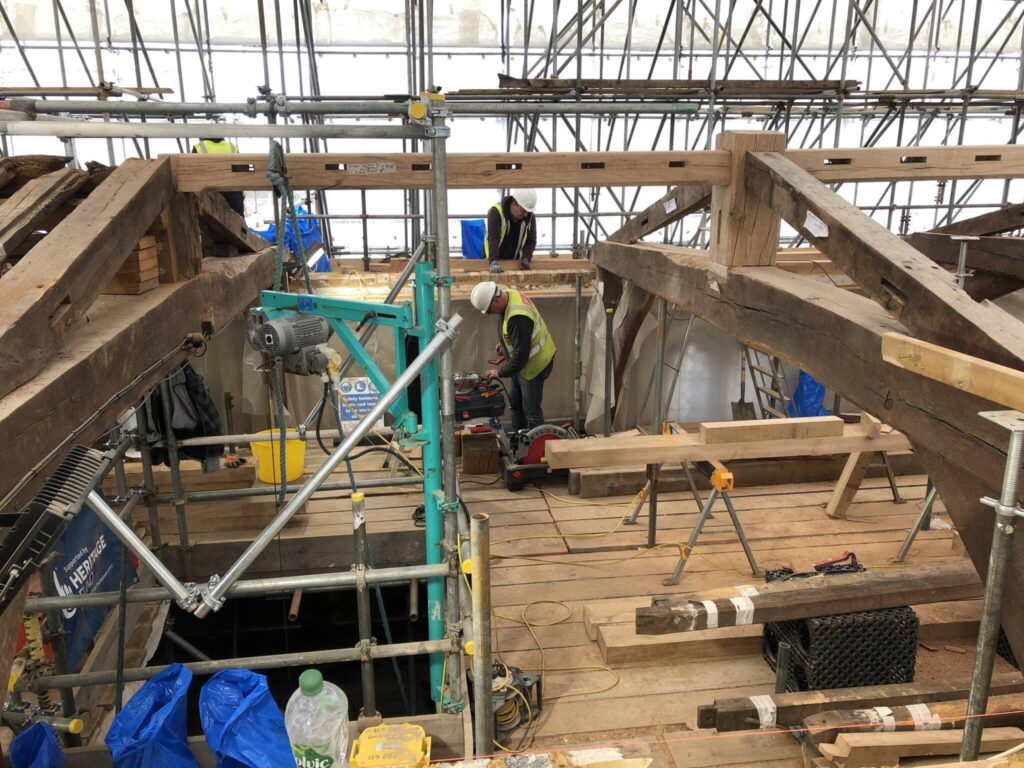 The carpentry workshop has been set up on top of the internal scaffolding, so that the craftspeople can remove, measure, repair or replace the timbers as needed, guided by the conservation-led approach: retaining as much of the original material as possible and following original building methods. 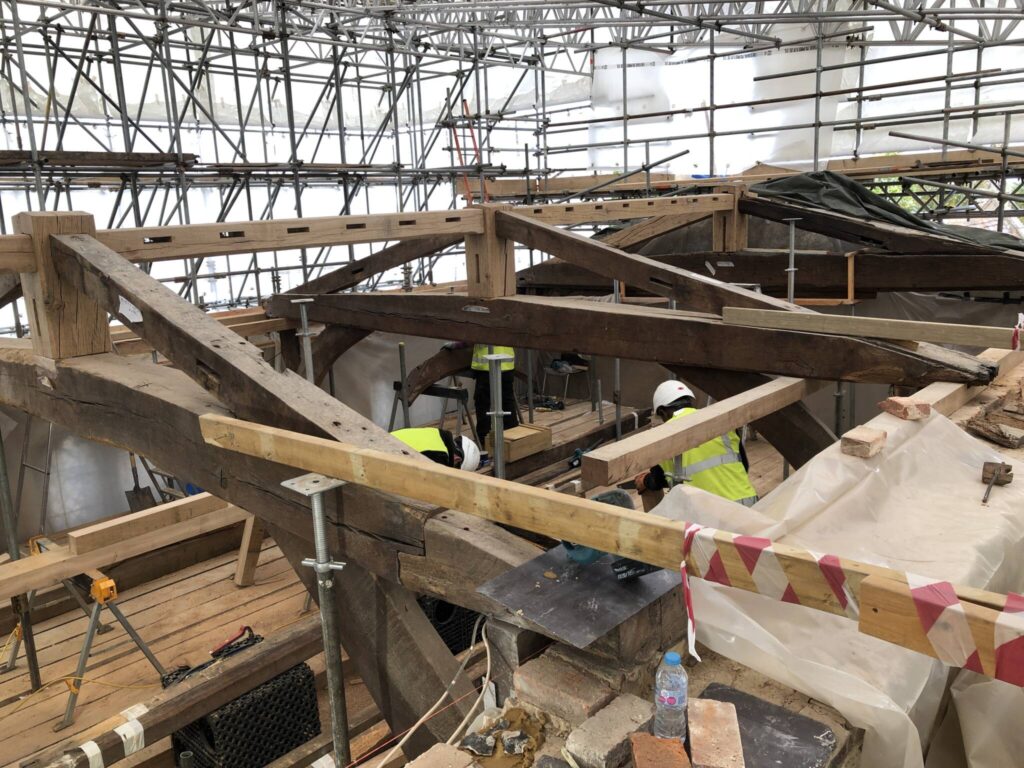 The ridge timbers running along the length of the roof, and their stubby King Post supports, have been newly made from air-dried English oak already around 500 years old. The originals had been badly damaged by rot and deathwatch beetle, and as a result the roof was slowly collapsing downwards. 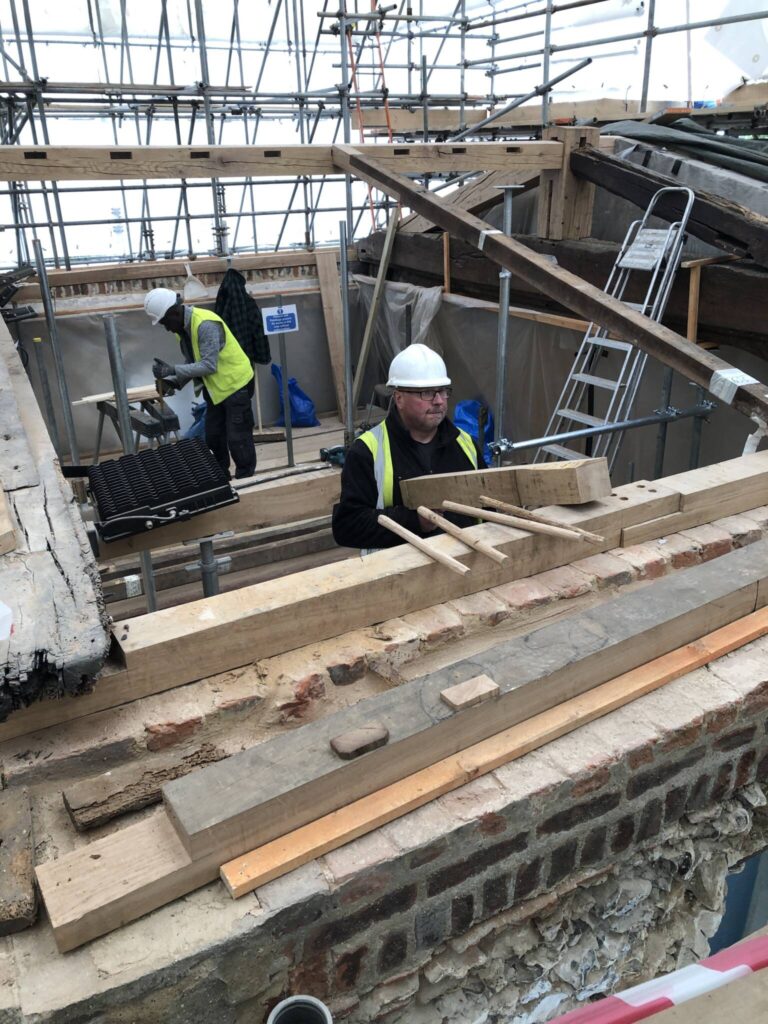 Rick the head carpenter explains the work being done – in the foreground, on top of the new wall-plate, are some of the replacement timber pegs which have been made to pin the mortise-and-tenon joints together in the traditional manner. 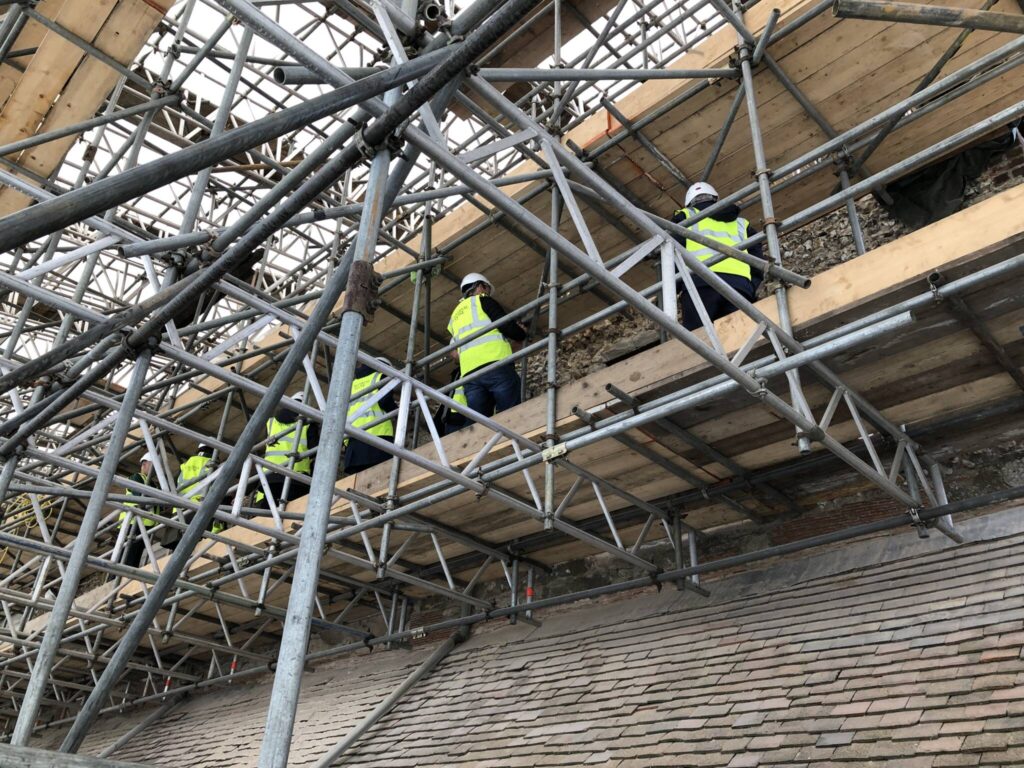 The scaffold walkway – this photo gives a sense of the intricate engineering design which goes in to make a scaffold strong enough to support the necessary weight, whilst providing access for people and materials, and a stable platform for the restoration work. 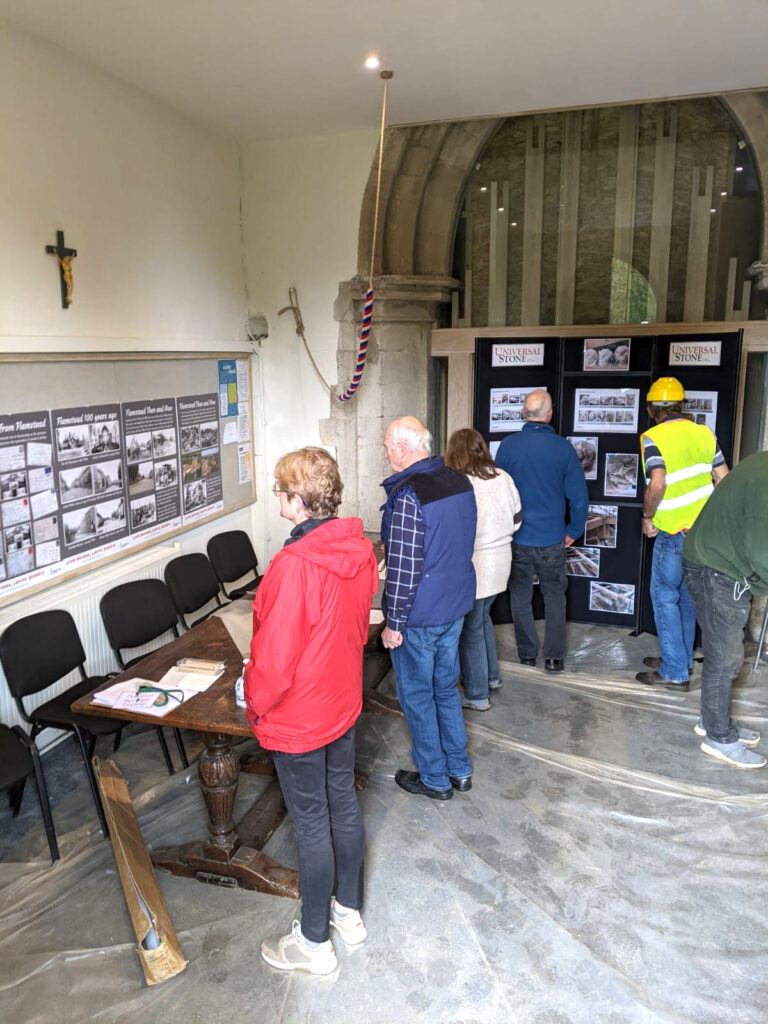 Exhibition in the tower showing archive photos of the village as it was around 100 years ago, and details of the tracings used to make the new angel-head corbel and the window tracery. 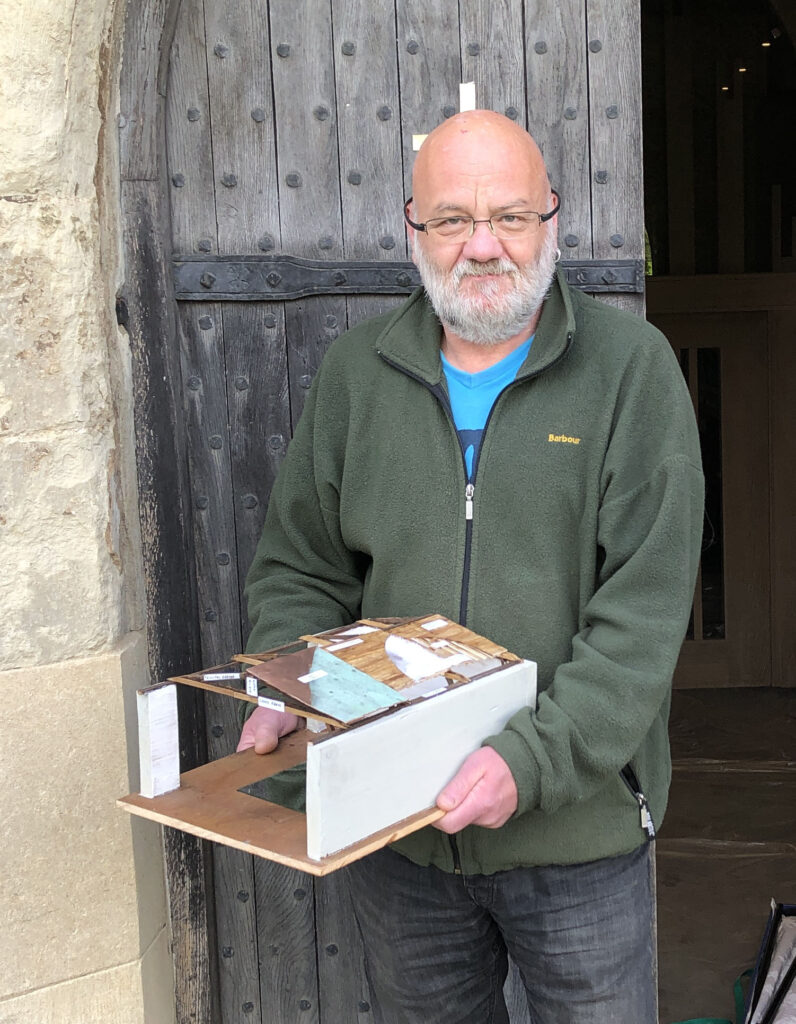 Heritage Project volunteer Bryan Thompson made a fantastic scale model of the nave roof structure from lolly sticks and some wood from the old organ, to help exhibition visitors appreciate how it all fits together and what the different parts are called. 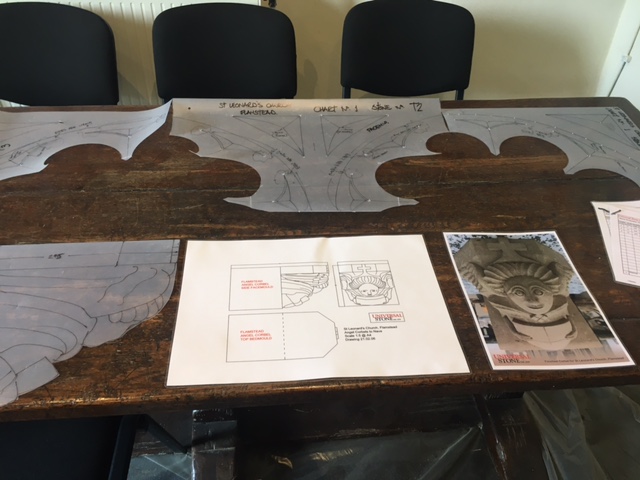 Tracings for new windows and angel-head corbel. Before the stone was carved, a scale model of the new corbel was made as a resin “maquette” so the details and proportions could be checked. 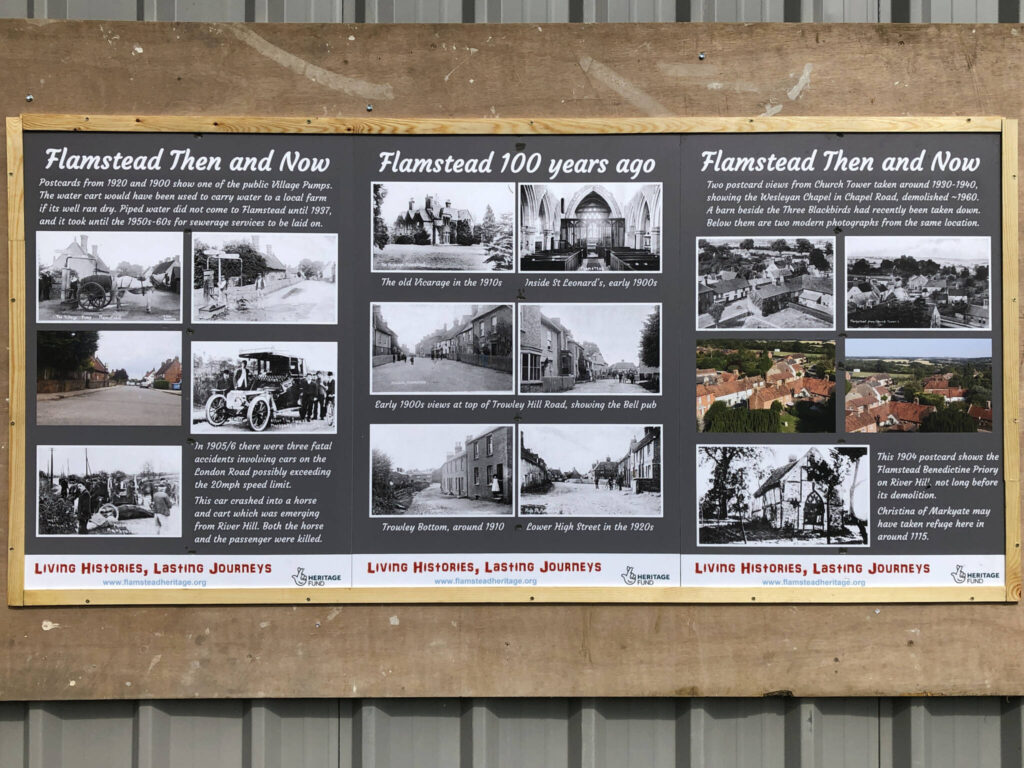 Exhibition panels on the scaffold hoarding showing something of the history of Flamstead, based on a collection of vintage postcards owned by and used with kind permission of Chris Motley – for more, search “Herts Memories Flamstead”.