After 7 months of painstaking work during the course of this year – carefully taking the failing roof apart, updating the drawings and repair specifications, ordering timber in good time to beat the supply shortages, fabricating the new parts – the roof of St Leonard’s Church is now being put back together again. Each of the 6 bays has its stubby king-post relocated on the massive cross-beams, and they in turn receive the newly made ridge timbers which sit on the haunches of the posts and create a now-solid spine for the roof, pegged into position using traditional methods. Plugged into these are the rafters, again pegged with tapered wooden dowels to lock the joints firmly. Many rafters have had new ends grafted onto them, shaped to reflect the original profile, and securing them firmly now to the ridge and to the newly installed wall plates. 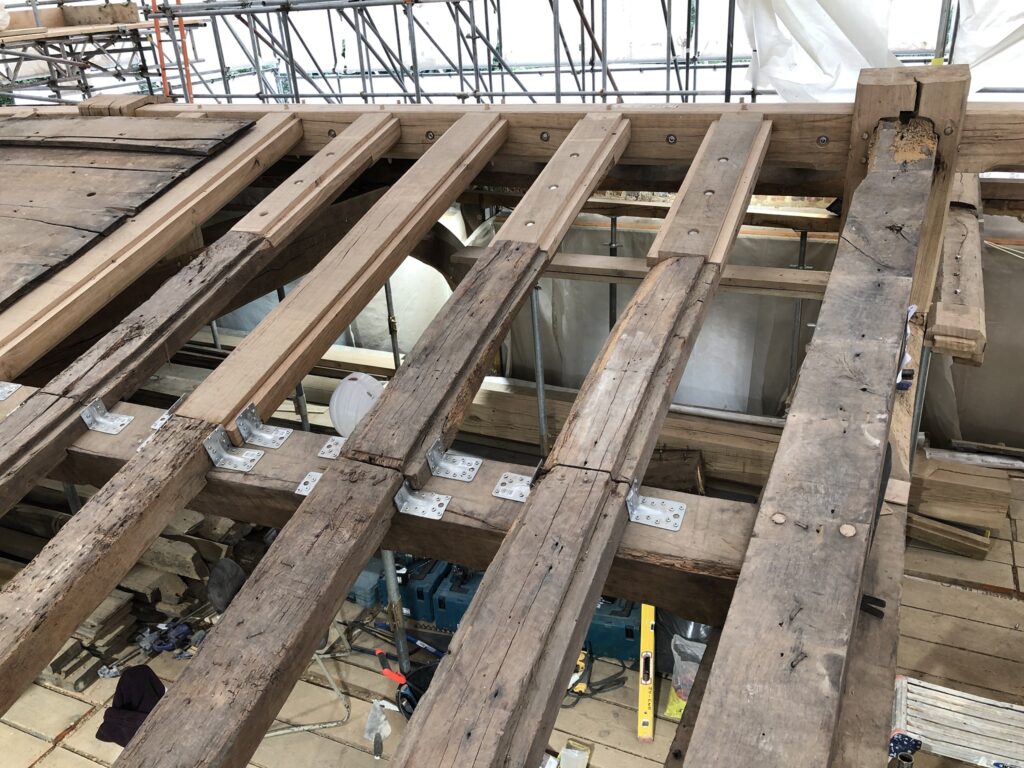 Repaired rafters are fixed back into position, attached to the new ridge beams.

As each section is completed, the original medieval boards are then screwed back on top. Above those will go a layer of diagonal softwood boards, some insulation, and then, during September, the new copper roof – which we expect to last 100 years. That will be bonded to the lightning conductor on the tower and the whole system tested to ensure the building is properly protected. The roof alarm will be extended to cover the nave roof. The maintenance budget, created by the Building Maintenance Team and supported with funds from the Friends of St Leonard’s, ensures that money is set aside each year in a sinking fund ready for the next time the copper roof needs to be replaced. This new governance approach is part of the commitment to the funders that the outer roof will never again be left for years in leaking a state and with no money to replace it – the reason the timbers rotted in the first place. 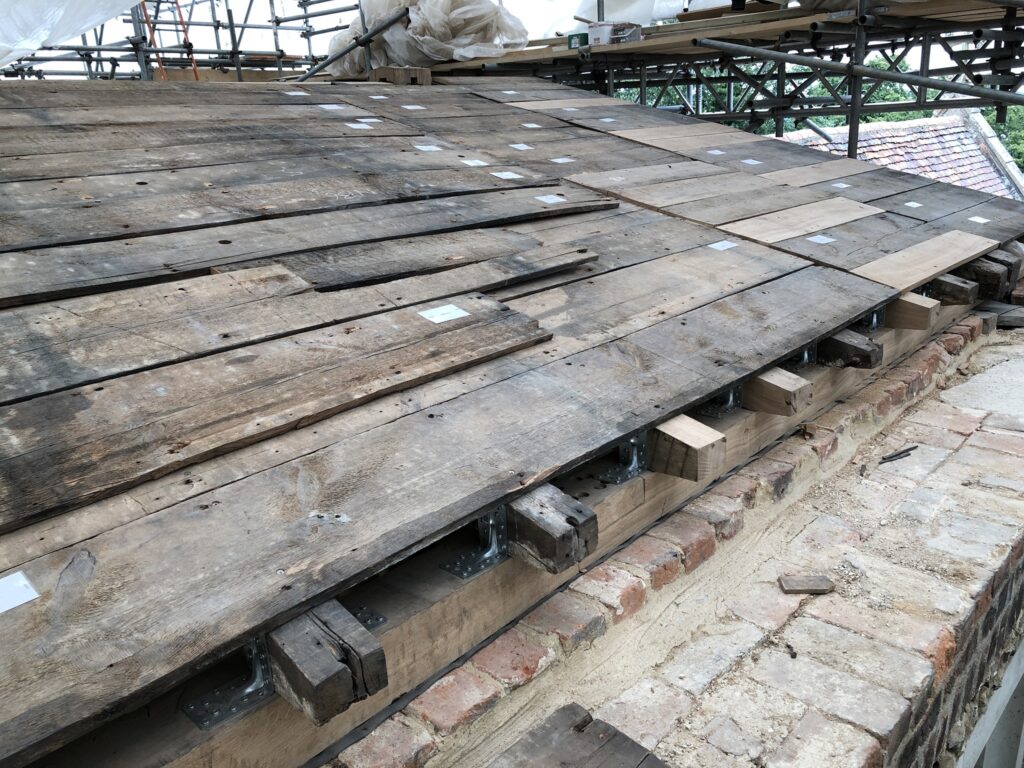 Medieval boards fixed to the rafters, with the newly rebuilt wall head below.

Internal repairs to the stonework of the four south clerestory windows have also been finished, and the leaded light glazing re-fitted into the slots between the inner and outer faces. Angel-faced stone corbels now support all the timber uprights of the roof, replacing two “temporary” Edwardian wooden blocks high in the nave walls. The wall tops – pretty much rubble when the work started – have been rebuilt, and the cement between the flints around the windows replaced with lime mortar. The next stage will be to add oak fascia boards and hang new gutters and metal downpipes, rather than the plastic ones which regularly used to fall off the south aisle roof. That roof will have about 200 broken and missing tiles replaced to make it watertight again. 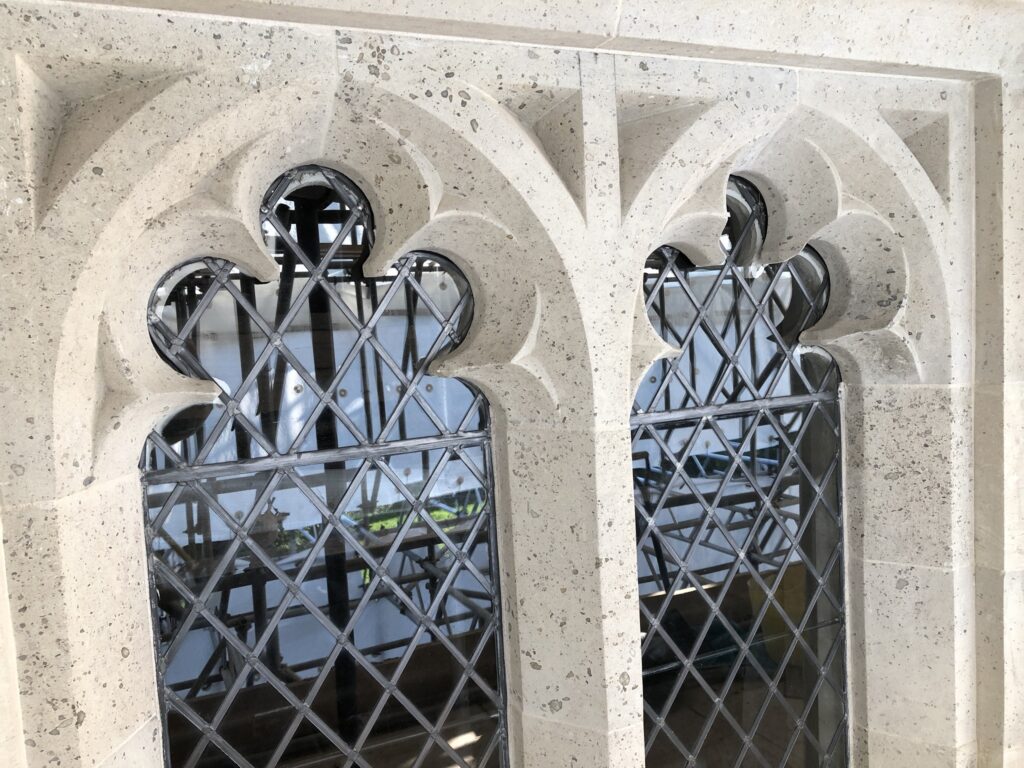 Leaded light glazing refitted to the new stonework to complete this window.

We have asked the Diocese for permission to create a second new soakaway near the south porch, because that area tends to flood in heavy rain. The new soakaways, gutters and downpipes will prevent rainwater overspills and keep the water away from the walls, which in turn will help the building dry out, killing any remaining deathwatch beetles and helping to preserve the wall paintings.

The current project programme shows the internal work being completed and the internal scaffold removed by mid September, with further repointing on the outside and the external scaffold removal scheduled for completion by the end of October. This massive programme of work has taken longer than expected due to COVID delays, the need to safeguard bats, the challenges created by “unconventional” rebar and resin repairs to medieval timbers in the 1980s, the very significant state of decay in the ridge and wall plate, and the more time-consuming creation of mortise-and-tenon joints for each repaired rafter. But one thing we know for certain: this time it’s been done right. Our budget has been stretched to the limit, but we still expect the work to be fully funded by the immense efforts made during the three years of focused fundraising which started in 2017, during which many people from the local and wider community, as well as local organisations, dug deep in support of our fantastic 12th century church.

Once the church re-opens, we shall repay that support by ensuring the building is well maintained from now on, and by sharing its fascinating history and heritage with many more visitors in new and exciting ways. As well as pitching to the National Lottery Heritage Fund for financial assistance with the repair and restoration work, we also presented an exciting Activity Plan which explained how we would share that heritage more widely and with diverse audiences – restoring the church to its role as a community hub for everyone. Thanks to National Lottery players, that Plan also has Lottery funding, and now the COVID restrictions are thankfully receding, we are preparing to embark on the next chapter of discovery into the history of this remarkable and resilient building.